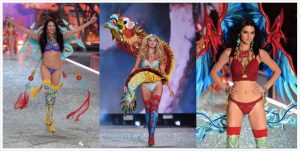 In their attempt to break into the Chinese market, Victoria’s Secret seems to have been caught with their pants down. Their most recent fashion show in Paris last December was intended to win over Chinese shoppers as the company is in the process of opening their first stores on the mainland. But critics saw things differently. The Global Times called Victoria’s Secret “the latest international brand to rub Chinese consumers the wrong way with ill-conceived Chinese-inspired elements in its designs.”

Online critiques were less friendly. An article on Cosmo’s website (since removed) breathlessly proclaimed Victoria’s Secret’s lingerie to be ‘racist’ and accused the show of ‘cultural appropriation’ – the taking of one culture by people of another culture often without consent.

Opponents of this argument pounced claiming that the politically correct thought-police have once again gone too far. Some said they would buy the dragon undergarments just to spite those offended. (Other concerned netizens recommended the models remove the controversial underwear immediately until the issue is resolved.)

Sadly this whole debate, which was mostly western in origin, ignored the more interesting and practical issue of how exactly a company should localize in order to win business in new markets. Surface level changes – slapping a dragon on a product – almost always fail, as has happened here, so how can companies crack this code?

Luckily, it wasn’t all bad news. While the feedback from Chinese audience confirmed that the show missed the mark, Victoria’s Secret did get kudos for including a record number of Chinese models. However, putting them in dragon underpants didn’t come across as a sincere attempt to connect with Chinese customers. The clothing was perceived as tacky and unappealing.

The bottom line was that the Chinese weren’t offended, it was worse, they were uninterested.

Ultimately, sales figures won’t lie. As the company opens their first stores in the mainland and expands their online presence it’s the end users who will be the true test of their success or failure in China.

Accusers of ‘cultural appropriation’ as well as their detractors both missed the point. Companies who expand globally need to be able to experiment with new ideas and find ways to appeal to local audiences. Creating artificial cultural barriers, including seemingly knee-jerk accusations of racism, won’t help, nor will poorly thought out localization plans that, in this case, literally slap dragons on to products. Companies can’t afford either of these mindsets when expanding globally.

Localizing is a balancing act between maintaining a company’s identity while at the same time finding new ways to appeal to diverse audiences. For companies going abroad into vastly different markets such as China, this is a new challenge. Companies who have gone through this before know that localizing is always difficult to get right. Disney’s expansion into Europe and Asia over the past few decades is a good example of a company that’s learned from its mistakes.

To appeal to new audiences, companies have to try to sincerely understand local markets. Research and awareness of what works and doesn’t work can go a long way. What kind of research did Victoria’s Secret do prior to unveiling these designs? It appears not much.

At a more foundational level, before companies can successfully expand out, they have to first look deeper within their own company culture if they are to succeed. International expansion requires new ways of thinking, including an emphasis on cultural intelligence – the ability to relate, and effectively work, across cultures. To do this, companies need to evolve.

Realistically, every company who expands into new regions will make cultural mistakes. Being overly fearful of making cultural faux pas will limit companies’ abilities to experiment and try out new ideas across different parts of the world. Conversely, being culturally unaware (slap dragons!) will also lead to costly mistakes.